Pulham Herefords are members of the SAC Premium Cattle Health Scheme, and hold Elite Status. We are accredited for BVD, IBR and Lepto and are risk level 1 (the lowest risk) for Johne’s disease. We are in a 4 year TB test area, with our last full herd test in November 2017.

Females for sale, please contact us to discuss your requirements. Below are three heifers which have recently been reserved by perspective buyers. 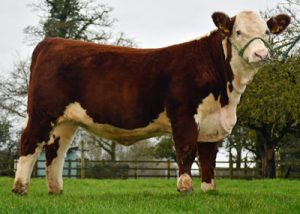 3rd March 2020
Sire: Appel 1 Kaboom
Dam: Pulham 1 Curly 3rd
Visit Breedplan for full pedigree and EBV
This heifer is a tank! She has been a standout from day one. Her mother is a very milky Romany 1 Machine daughter and her sister was exported to Denmark. 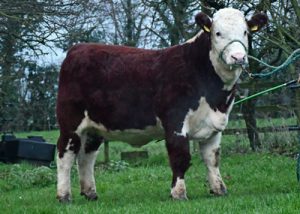 25th February 2020
Sire: Shiloh-Farm Elite
Dam: Pulham Hazel 15th
Visit Breedplan for full pedigree and EBV
A super stylish heifer from our Hazel family. One of the first heifers we have offered for sale sired by Shiloh-Farm Elite. This girl has been a eye catcher from day one. 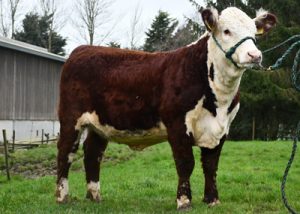 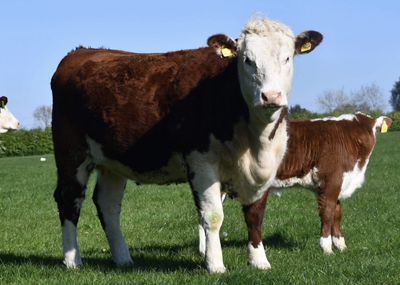 14th September 2018
Sire: Haven Kermit
Dam: Haven Dowager 161st
Visit Breedplan for full pedigree and EBV
A correct heifer out of one of our best horned breeding cows who was also the dam of Pulham Dowager 4th our 2018 Designer Genes heifer who sold for £8,400. We are confident Dowager 5th will be a great addition to James and Ellen Lake’s growing Borovere herd. Ellen and James also purchased two yearling heifers from us at the end of 2020 – Pulham Blossom 25th and Pulham Diadem 5th. 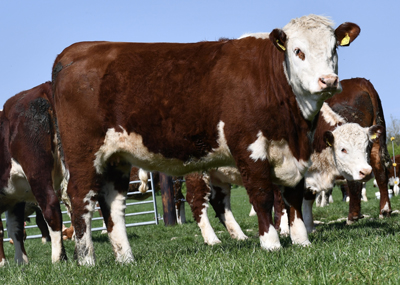 21st March 2019
Sire: Haven Kermit
Dam: Clipston Pansy J562
Visit Breedplan for full pedigree and EBV
A lovey heifer, sold to Brewster Farms, out of Clipston Pansy J562 a cow who has bred very well for us. Pansy 21st’s maternal sister was second at the National Hereford Show in 2016 and her maternal brother was successfully shown and sold to Nancy Herefords, Northern Ireland.

In 2020 we sold a Pulham “Starter” herd for the first time. The herd was bought by Owen and Finlay, Anglesey, Wales and consisted of 5 mixed aged females and a young bull, Pulham Supersonic. The females were from the Agnes, Bonny, Hazel, Pansy and Tiara families and included Pulham Hazel 8th who won her class at the National Hereford Show as a heifer. 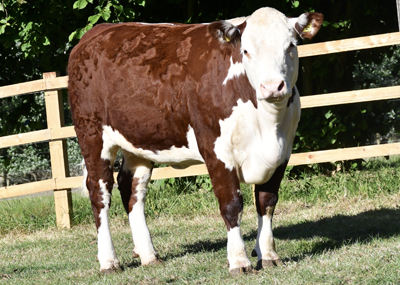 9th October 2018
Sire: Appel 1 Kaboom
Dam: Romany 1 Dawn H12 N13
Visit Breedplan for full pedigree and EBV
A smart heifer out of a prize winning Romany cow and by our stock bull Appel 1 Kaboom who is producing us some great heifers. Dawn 3rd was exported to Jean-Francois Protheau. 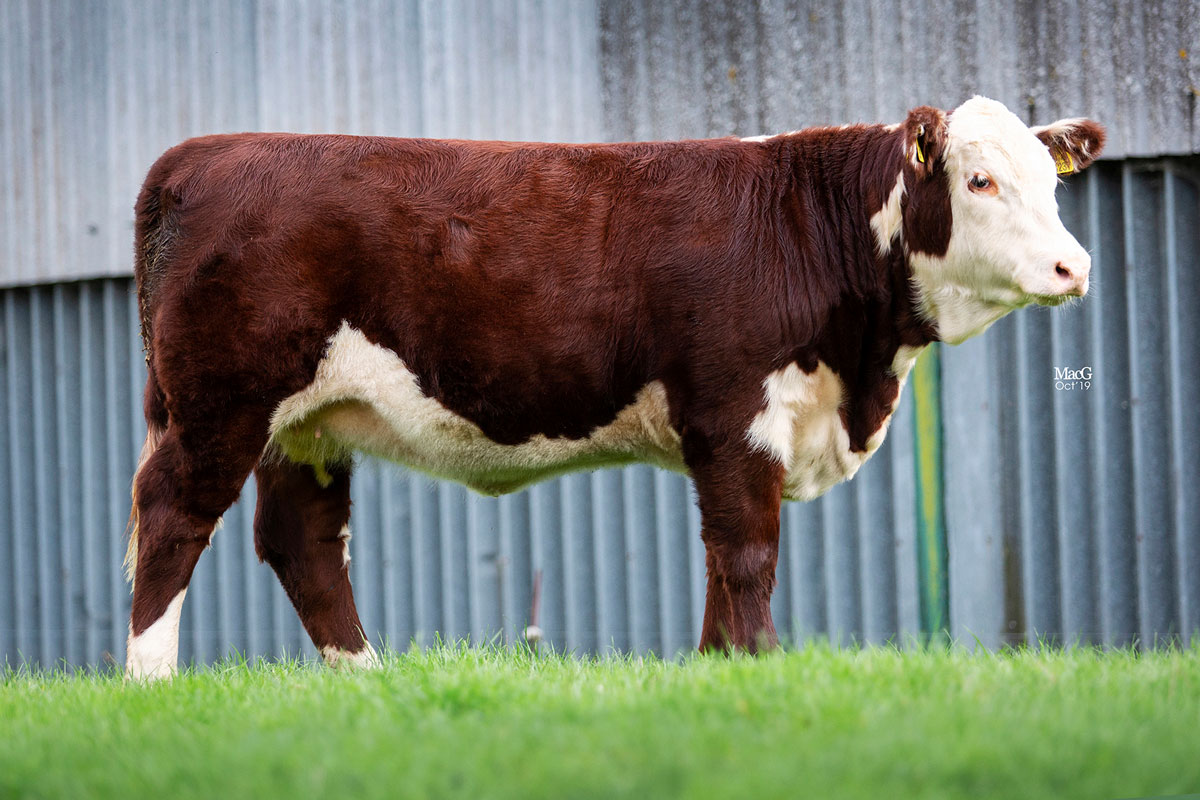 23rd February 2019
Sire: Appel 1 Kaboom
Dam: Pulham 1 Curly 3rd
Visit Breedplan for full pedigree and EBV
Full of muscle this heifer is out of a homebred cow Pulham 1 Curly 3rd who we rate very highly. There was some debate among the Danish visitors about which heifer they preferred, Curly or Julia. We were delighted when Henning and Jytte Have, Nordbaek Herefords, decided to import both.

27th October 2018
Sire: Appel 1 Kaboom
Dam: Romany 1 Julia H12 M7
Visit Breedplan for full pedigree and EBV
A standout heifer, it was hard to let her go, but we couldn’t resist the opportunity to make our first export to Denmark. We thank Henning and Jytte Have, Nordbaek Herefords, for having confidence in our breeding programme and wish them every success with Julia. 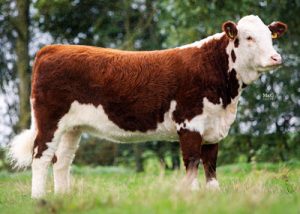 1st October 2018
Sire: Haven Kermit
Dam: Clipstom Tiara P17
Visit Breedplan for full pedigree and EBV
A eye catcher from the day she was born. Tiara offers milk, meat, maternal traits and is a pleasure to work with. Her dam Clipstom Tiara P17 has bred so well for us, including Pulham Norfolk, who is herd sire at Hickling Herefords.  We are retaining a full sister & half sister.  Sold at the 2019 Designer Genes Sales to the James Lake and Ellen Lee, Borovere Herefords for £4,095. 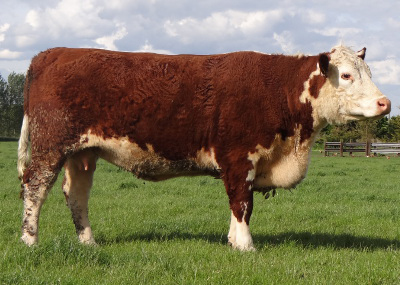 15th March 2011
Sire: Solpoll 1 Dynamite
Dam: Solpoll 1 Starlet B10
Visit Breedplan for full pedigree and EBV
Starlet H18 is a large framed stylish cow. She is sired by highly successful and impressive bull Solpoll 1 Dynamite and out of Solpoll 1 Starlet B10 who was Northern Ireland’s Female of the Year in 2007. Having had 5 calves at Pulham we sold her to Ellen Lee and James Lake, with her bull calf Pulham 1 Saxon at foot, to start their new herd Borovere Herefords. We wish them every success. 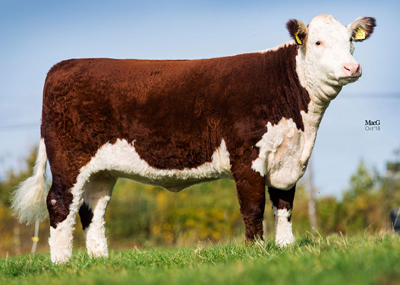 28th September 2017
Sire: Haven Hotspur
Dam: Haven Dowager 161st
Visit Breedplan for full pedigree and EBV
We only believe in selling the very best at the DGS Sale and our 2018 entry was no exception to this rule. A long, stylish heifer, with a fantastic pedigree. Dowager 4th was second in a strong class at Agri-Expo, Borderway, in November, before making the trip to the Designer Genes Sale in December where she secured the joint-top female price of the sale, an incredible £8,400. Well done to Robert Norman, Hickling Herefords for making this very special purchase. 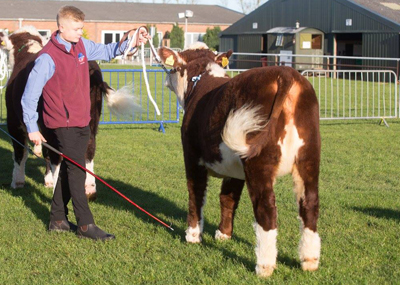 Jonathan and Sue McInnes Skinner have bought two heifers, a Pansy and a Hazel, in calf to Pulham Pacesetter. 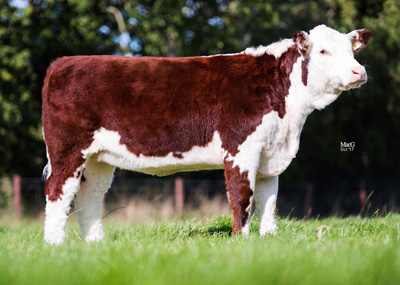 22nd January 2017
Sire: Pulham Maverick
Dam: Pulham Blossom 10th
Visit Breedplan for full pedigree and EBV
It was a tough decision deciding to enter this special heifer from the Badlingham Blossom 7th line into the 2017 Designer Genes Sale. It was even harder taking her into the Sale ring after she was placed First and made Reserve Female Champion in the Shrewsbury Christmas Calf Show on the morning of the Sale! Pulham Blossom 20th is a beautiful feminine heifer that has style, show potential, good growth figures, dark colour, depth, length & width. We were thrilled when she was sold for £5,460, making her the highest priced horned female in the sale, to S Taylor & D Marsh, Lancashire. 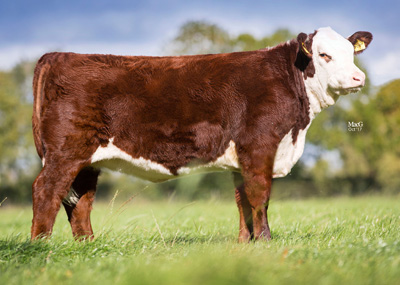 16th March 2017
Sire: Romany 1 Machine D1 M13
Dam: Solpoll 1 Starlet K6
Visit Breedplan for full pedigree and EBV
Our second entry into the 2017 Designer Genes Sale was Pulham 1 Starlet 6th who sold to new Norfolk Hereford Breeder and previous on farm customer Jonathan McInnes Skinner, Bures Farm Partners, for £4410. At 180 days she weighed a tremendous 305kgs which works out at a daily weight gain of 1.45kgs/a day. Starlet’s 200, 400, 600 day weights & milk figures are in the top 10% of the breed. She oozes style, is dark in colour, has great eye pigment, length and depth. She has a lovely temperament and was a pleasure to halter train.

We wish Mr S Whiting well with the females he purchased from us in 2017.

We wish Jonathan McInnes Skinner well with a group of females we sold him to go with his Hereford bull Haven Magnum. 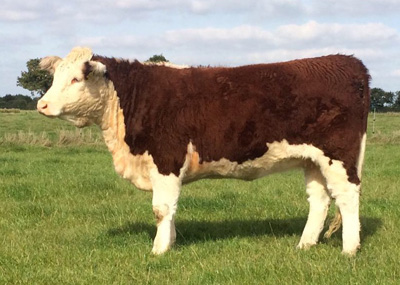 We were delighted to sell Robert Norman, Norman Farming Partnership, Norfolk, a group of females to establish his Hickling Herd. These foundation females included a very special heifer, Pulham Blossom 13th, who was judged the best heifer under 2 years in the Midlands and East Anglia Hereford Breeders’ Association Herd Competition in 2015. Photo above.

We were pleased to sell a group of females, including Pulham Hazel 4th who was shown in 2012, to EF Shingfield and Sons, Hingham, Norfolk in December 2014.

We wish DJ & JM Blaxell well with the two yearling heifers sired by Sarabande Huggy Bear they purchased from us in February 2014 for their Bittern herd.

In June 2013 we sold a group of females to DW Filby and Son, Aldborough, Norfolk. The group consisted of 3 in calf heifers, including Pulham Countess 1st, who was Supreme Champion at Hadeligh Show in 2011 – see Shows 2011 for details and 2 yearling heifers sired by Sarabande Huggy Bear. 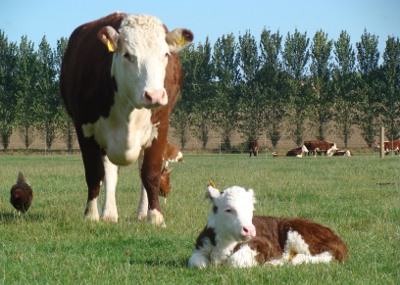 We had pleasure in selling 3 heifers and 2 heifer calves to JR Blackmore, Halesworth, to start his herd of Herefords in June 2012. The group consisted of Pulham Hazel 1st, who was sucessfully shown in 2010 – see Shows 2010 for details, Stapelford Bonny 2nd, their heifer calves Pulham Hazel 5th and Pulham Bonny 4th, both sired by Sarabande Huggy Bear and Pulham Hazel 3rd.