The first full show season where we showed Sarabande Huggy Bear’s calves and what a job they did for us. Pulham Blossom won her class at both Royal Norfolk and Hadleigh Show. At Hadleigh she went on to be made the Reserve Female and Reserve Supreme Champion. Pulham Hercules also won his class at Royal Norfolk and Hadleigh. He was the Male Champion at Hadleigh and the Male and Supreme Champion at Royal Norfolk. In the Inter-breed at Norfolk he was the Reserve Native Junior Bull. We also kept a close eye on our new bull, Haven Hotspur, who was shown by his breeders and 50% owners, EL Lewis and Son. We were delighted that he won a strong class of young bulls at Shropshire Show and was placed first in a large pairs class, with Haven Dowager 169th, at Three Counties. 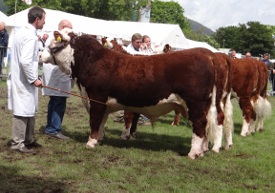 Haven Hotspur in the pairs class at Three Counties 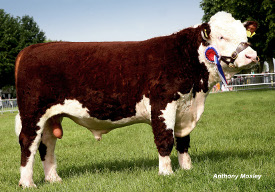