The well known and very successful Blossom family began in 1963 with the birth of Badlingham Blossom, out of Llandinabo Gay Girl and by Baysham Sage, both sired by Tarrington March On “surely one of the most influential bulls ever bred.”

The Blossoms have achieved so much both in their own right and as sires in many other prominent pedigree breeders herds that we are unable to cover all their successes, but a few are listed below.

One of the most prominent horned female families in the breed today, we are proud to have them in our herd.

Quotes – Colin Clarke, The Blossoms – A Bit of Luck

A really strong heifer who has the potential to breed something special. Her first calf is already showing promise.

A lovely heifer who was second in her class when we showed her at the National Hereford Show in 2018. She is one of two heifers we have in the herd sired by Pulham Northern Lights. 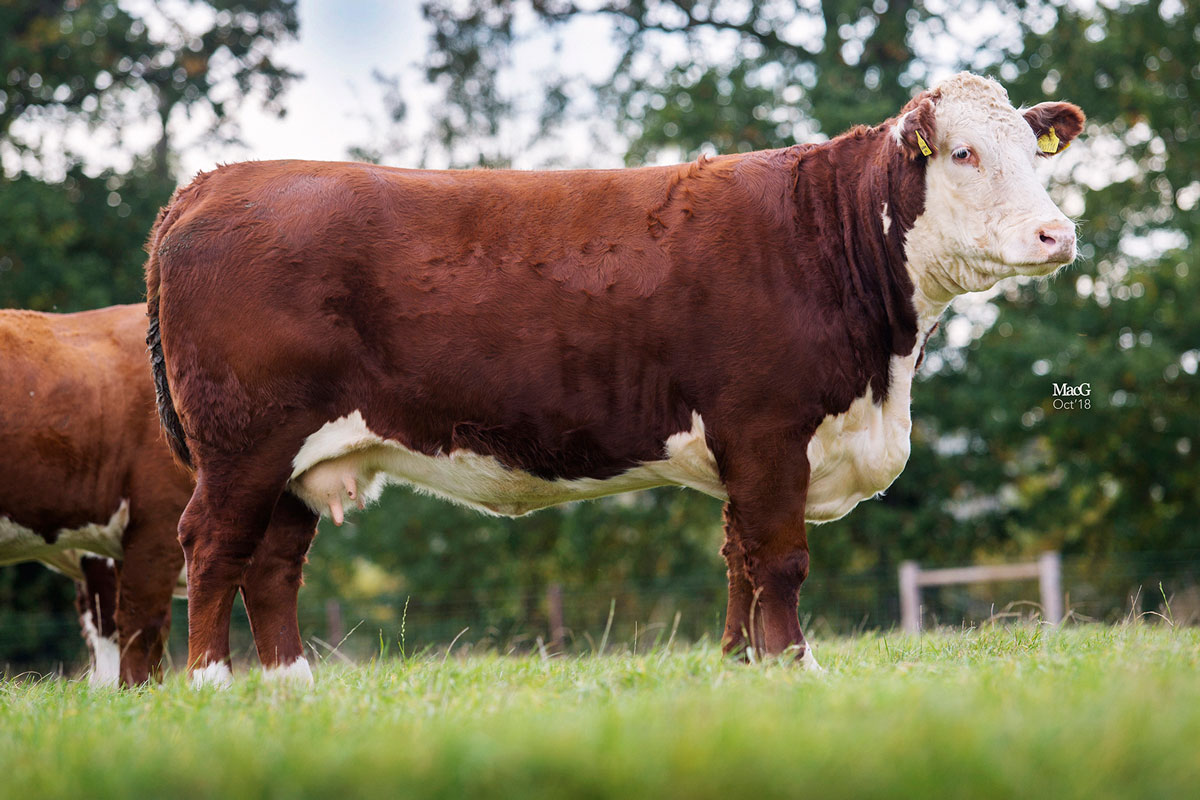 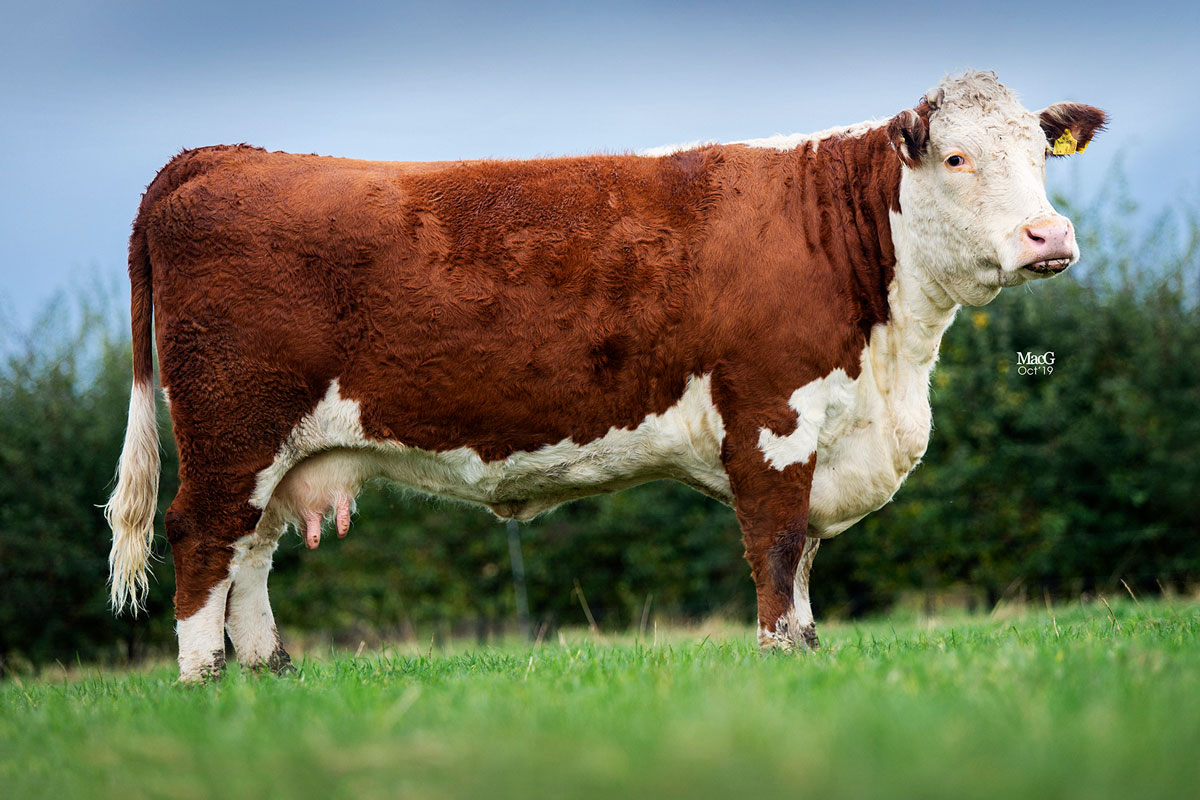 Our only descendent from her grand-dam Badlingham Blossom 121st, Pulham Blossom 10th is a cow who gives everything to her calf. Blossom 10th was first at the National Hereford Show in 2015 and her second calf was Reserve Female Champion at the Shrewsbury Calf Show in 2017. This calf, Pulham Blossom 20th was then sold in the Designer Genes Sale for over £5,000.  Blossom 10th had another excellent heifer calf in 2018, who will be retained in the herd. Her fourth calf Pulham Supersonic  has been sold to Owen and Finley, Anglesey as part of a Pulham starter herd. 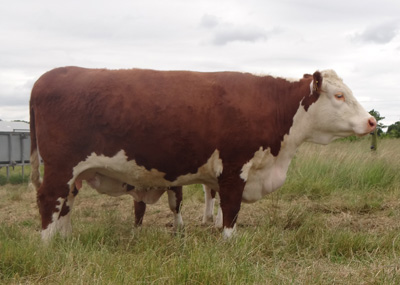 A lovely Sarabande Huggy Bear daughter who is full of breed character. Her first calf was Pulham Miracle who was first at the National Calf Show, Shrewsbury in 2015. Her second calf, Pulham Blossom 19th was Intermediate Female Champion at the National Hereford Show in 2017.

A lovely cow with plenty of width.

A strong solid cow who came first in her class as a heifer at Royal Norfolk Show in 2012. 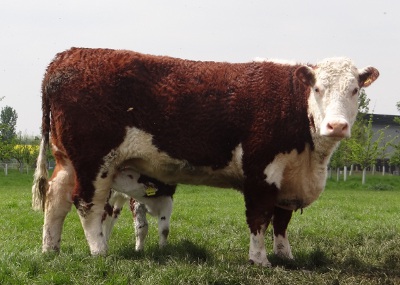 A impressive cow which we were very pleased to purchase from R & R Westaway. She has tremendous scale and volume. The Clipston Blossoms descend from the Badlingham Blossom 8th family line. 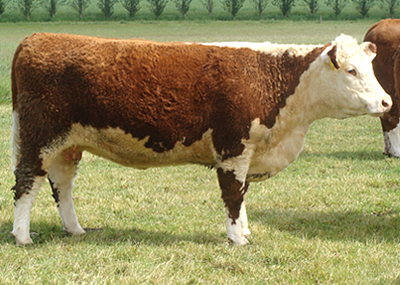 A correct cow like her mother, Badlingham Blossom 116th. In 2009 Badlingham Blossom 142nd was Female Champion at Hadleigh Show. Her sire Clipston Bowman was judged the Best Stock Bull in the Midlands and East Anglia Hereford Breeders’ Association Herd Competition 2004. We purchased her out of a group of heifers at AG Wright & Sons in 2009. Her 2011 calf Pulham Hercules, was the Hereford Breed Champion at Royal Norfolk Show in 2012. 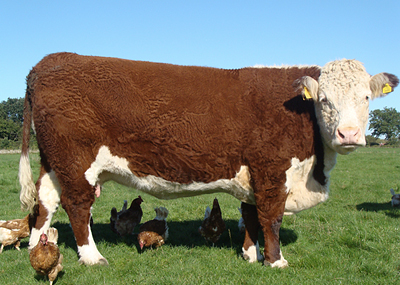 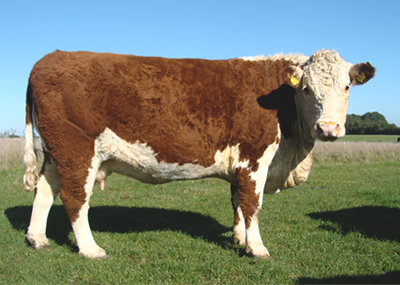