2018 was a great year in the show ring for Pulham Herefords. We had lots of local success with Pulham 1 Starlet 7th, which resulted in us winning the M.E.A.H.B.A. Sapsed Points Trophy for the first time. We had our best ever result at the National Hereford Show, with Pulham Pansy 15th being made Reserve Female Champion. We thoroughly enjoyed our first time exhibiting at the National Poll Show, and were delighted to be at the “business end” of our classes. Borderway Agri-Expo was another first, and the long trip was made well worth it when Pulham 1 Remitall was awarded Male and Reserve Breed Champion. As always the Shrewsbury Calf Show had huge entries and we were very please to end the season with a first and two seconds. 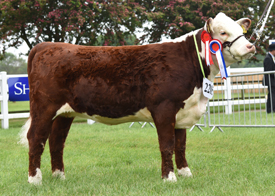