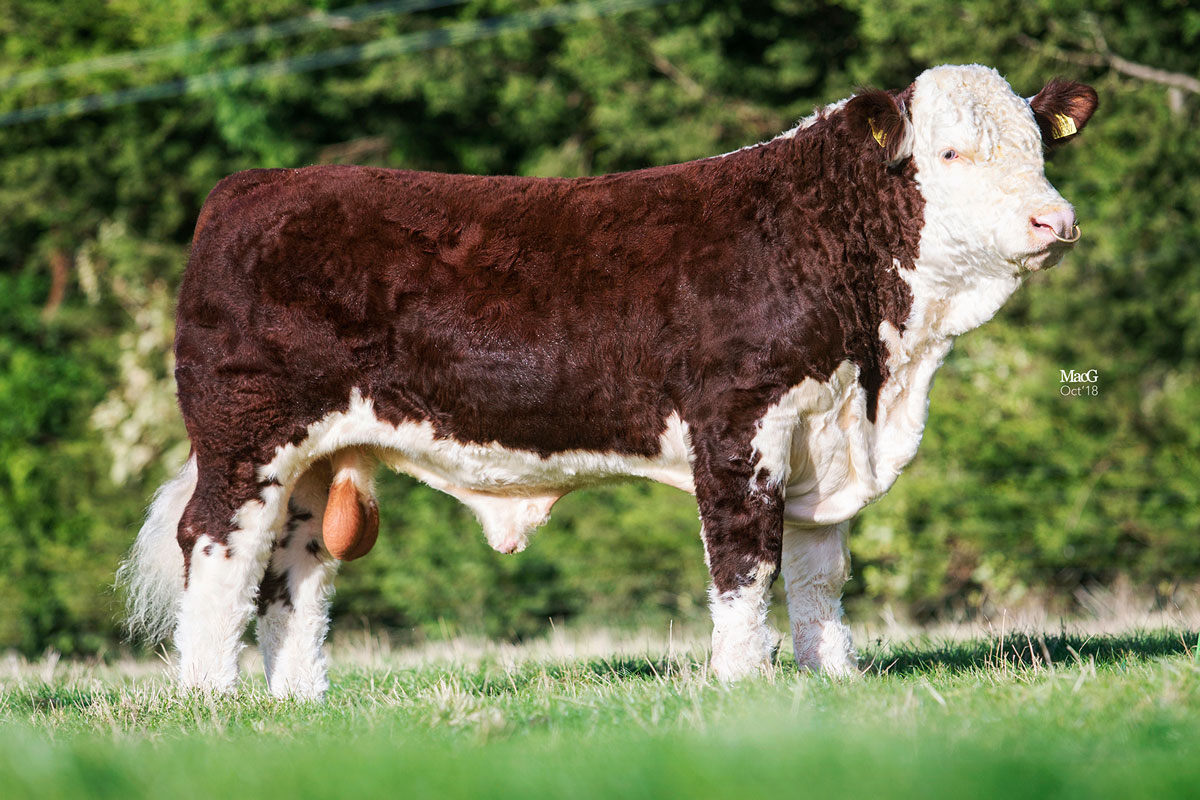 We first saw Elite when judging Longford Show, Ireland, in 2018. We fell in love with him and made him our champion against some very strong competition. He caught the eye of well know cattleman Danny Whyllie, when he visited Pulham to judge the National Hereford Herd Competition in 2018. 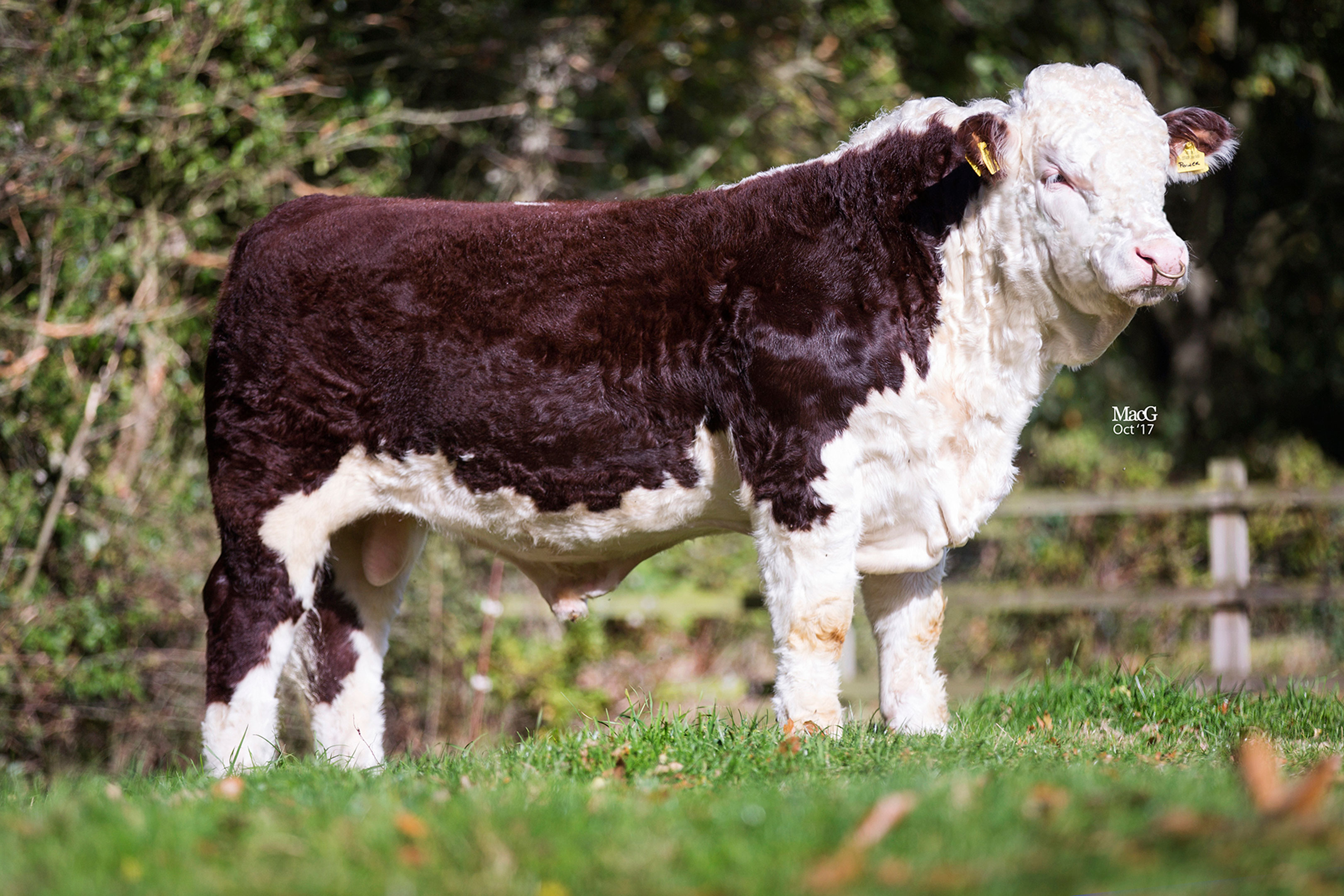 Powerhouse stood out right from the beginning and is out of Clipston Tiara R16 who was Horned Female of the Year in 2015 and is dam to Pulham Northern Lights. We had a great show season with Powerhouse in 2017, he was First and Junior Male Champion at the National Hereford Show, First and Reserve Male Champion at Bucks Show and First, Male and Reserve Breed Champion at Kington Show. He was also judged the best bull call in the 2017 Midlands and East Anglia Herd Competition judged by Malcolm Broome. Powerhouse has a fantastic EBV, his weight figures, terminal index and self replacing index are all in the top 5% of the breed, with his milk figure in the top 10%. He also has a calving ease direct figure on the easier side of the graph, bucking the trend for most bulls with such good weight figures. Powerhouse semen can be purchased in the UK from the Hereford Cattle Society. Please contact us for international sales.
Photo taken at 13 months 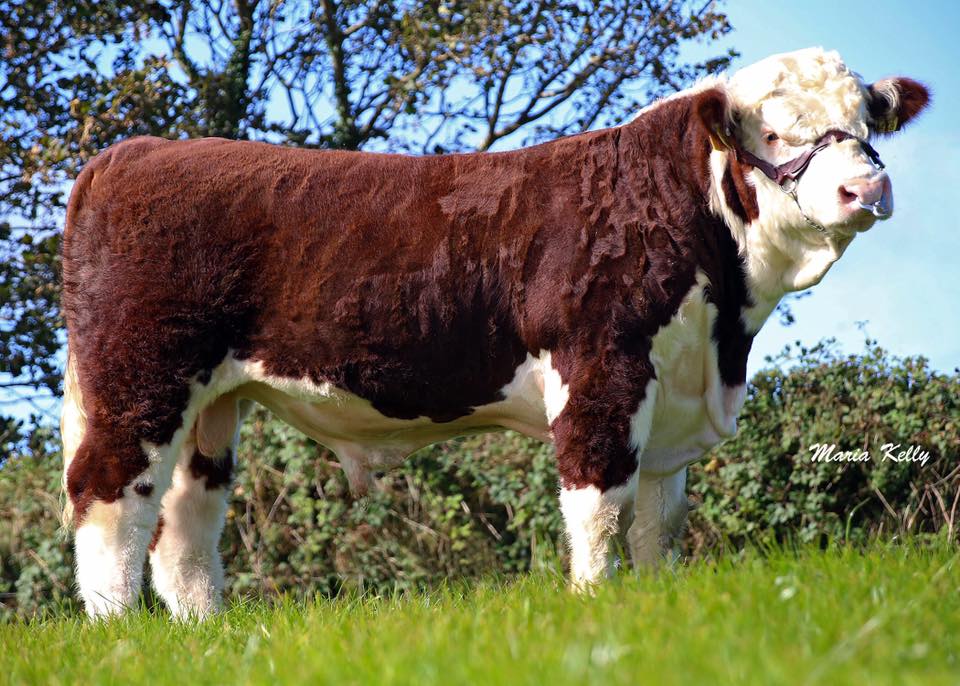 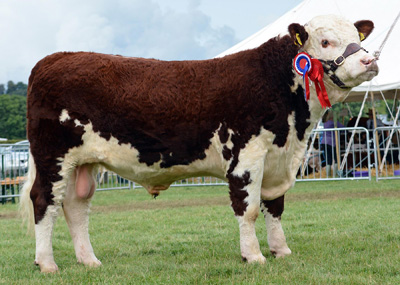 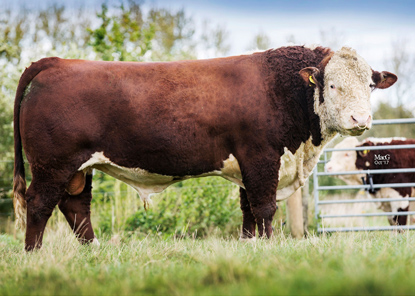 We purchased Machine from JRB Wilson and Sons as a weaned calf. Machine is sired by SMH Castro, a previous UK Hereford Sire of the Year and his Dam is a “Lucy” a highly successful family for Romany Herefords. He has proved to be easy calving and has really stamped a “type” across our polled herd. We have had a great 2018 show season with his progeny, including Pulham 1 Starlet 7th winning Breed Champion at South Suffolk and Suffolk Shows and Pulham 1 Remitall winning Male Champion at Agri-Expo, Borderway. With the introduction of his daughters into the herd we have sold Machine to R Crawford and Daughters, we wish them well with him. 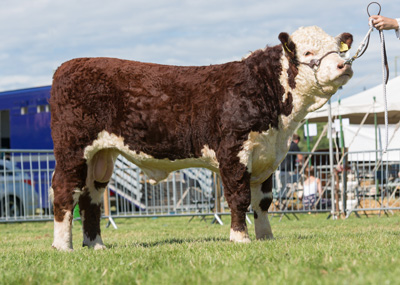 Pulham Northern Lights parents, Trillick Knockout and Clipston Tiara R16, were shown together in 2015 and were awarded Horned Bull and Horned Female of the Year respectively. Northern Lights didn’t disappoint and was the Junior Champion Bull at the National Hereford Show in 2016. Northern Lights has been used on a group of our Haven Hotspur heifers.
Photo taken at 10 months 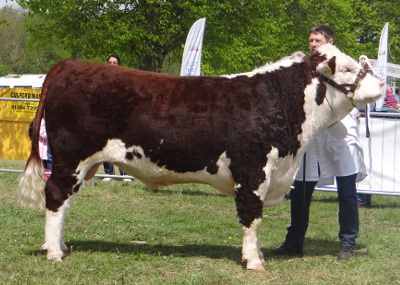 We first saw Haven Hotspur as a 4 month old calf on his mother, along with some other impressive Mawarra Vice Admiral sired calves at The Haven. Having kept a close eye on him, we purchased a half share in him from EL Lewis and Sons in the early part of 2012.
Hotspur won his class at the National Calf Show in 2011, along with being part of the winning group of 3 sired by the same sire. He also came 1st at Shropshire Show in 2012 and was 1st in the pairs at Three Counties, with Haven Dowager 169th, also sired by Mawarra Vice Admiral. In 2013 he was judged the best Junior Bull in the Midlands and East Anglia Hereford Breeders’ Association Herd Competition. Having been running with cows since the Spring, we pulled him out a week before the 2015 National Hereford Show and were delighted when he came 1st, was the Senior Male Champion and Reserve Male Champion. Having kept Hotspur for 5 years we sold him to the Gifford family, Twilight Herefords, Devon in 2017. Hotspur daughters are breeding well and this bull will have a big influence on our herd for years to come.

Pulham Maverick was first at Bucks Show in 2015. He is a correct bull with lots of length. We used him in 2016 before selling him to JR Blackmore, who established his herd with Pulham females in 2012. All his calves were born easily with no intervention. Maverick is sire to Pulham Blossom 20th, who sold for a herd female record price of £5,460 at the 2017 Hereford Designer Genes Sale. 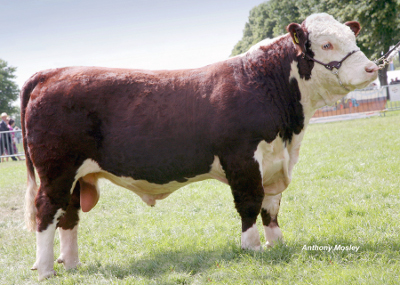 Pulham King Kong has a Terminal Index and Self Replacing Index in the top 20% of the breed. His dam Badlingham Hazel 26th was judged the best cow suckling a calf in the Midlands and East Anglia Herd Competition in 2013, whilst suckling King Kong. Growth rate at 5 months 1.54kg/day.
Pulham King Kong was shown in 2014, he was Male Champion and Reserve Supreme Champion at Hadleigh Show and third in a strong January born bull class at Royal Norfolk Show, taking the prize for the best Hereford bred and exhibited by a Norfolk breeder.
Photo taken at 14 months 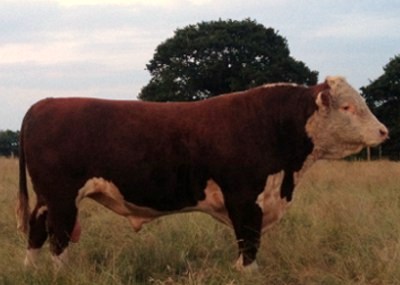 Badlingham Beefeater was purchased from the AG Wright and Sons dispersal sale in October 2012. Sired by Hermitage Bruno, who in turn was sired by PDHR 9322 Domino 69G semen, which had limited availability in the UK, Beefeater has a Terminal Index in the top 5% of the breed. Hermitage Bruno was successfully shown by AG Wright and Sons, in 2007 he was shown 5 times, including at the Royal and Three Counties, and was unbeaten in his class.
Beefeater’s dam, Badlingham Blossom 96th was the Female and Reserve Supreme Champion at Three Counties in 2005 and was Breed Champion at 3 shows.
Beefeater was judged the Best Bull calf in the Midlands and East Anglia Hereford Breeders’ Association Herd Competition in 2009 and was 2nd at the National Hereford Show in 2011. 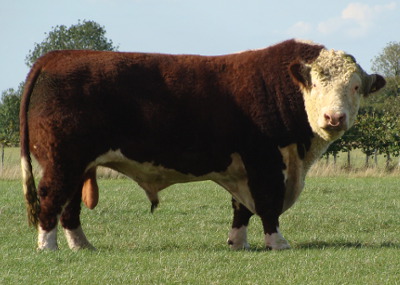 Selected for his correctness and excellent pedigree, Sarabande Huggy Bear was judged Best Stock Bull in the Midlands & East Anglia Hereford Breeders’ Association Herd Competition 2010. Sarabande Huggy Bear was successfully shown by his breeders, Mrs P Noel & Mr R Snelling.
In 2008 he was Supreme Champion, Interbreed Native Junior Champion and Reserve Champion in the Native Beef-breeder Class at South of England. Supreme Champion at Kent County and Reserve Male Champion at Hertfordshire Show.
His Sire, Badlingham Bafca was Bull of the Year in 2003 and is out of a Blossom cow, the great Badlingham Blossom 77th and by the very successful sire Clipston Krespian, who won the Supreme Championship at the National Hereford Show, Tenbury and has a Hereford Terminal Index of 37 (breed average 20) placing him in the top 1% of the breed. His dam is from the very successfully shown Emma family owned by Mrs P Noel and Mr R Snelling. His grand-dam has been an extremely high achiever having been awarded Horned Female of the Year both in 2003 and 2005. In 2002 she was Senior Female, Grand Female and Supreme Champion at the National Hereford Show, Tenbury. In 2003 she was Senior Female, Grand Female and Reserve Supreme Champion at The Royal. In 2005 she was once again Senior and Grand Female Champion at Tenbury and was the Reserve Supreme Champion.